THE AUSTRALIAN MIST COAT,
INCLUDING INTERACTION OF TEXTURE WITH THE EXPRESSION OF PATTERN

As usual, we start with the standard excerpts for the Australian Mist, and the contributing breeds:


The Australian Mist coat is not like any other coat in texture, when it is correct. The desired coat is quite hard to obtain, and descends from a very few cats. One of the founding domestics, Zetes, a blue spotted tabby, had exactly the short, fine plushy or moss like texture for which I was aiming. Nintu Zenobia, descended from Zetes, also had this coat texture, and it reappears from time to time in her descendants, such as Cyclopina, Kannara, Hebe and her brother Hakeem. It has recently reappeared from this line in Nintu Hamara Veya, both of whose parents are descended from Cyclopina.

More recently, Nintu Ceres Usnea, one of the first marbled cats recognised, also displayed this texture, as does her mother, Nintu Barbary Rune, who is still being bred from. Several of Usnea’s daughters have been or will be bred from, and it is particularly noticeable when the progeny are marbled, that the pattern has the subtlety of both clear boundaries, and subtle internal pattern marbling. The other original marbled, Nintu Even Roundel, also has this coat texture. A common element in both Ussi and Roundel’s pedigrees is the foundation Abyssinian queen, Utanipishtim Irnani, and her generation 1 son, Nintu Allspice.

How can this coat texture best be characterised, and how does it differ from the other coat textures commonly found within the breed?

Not only can the perfect coat be considered almost plush, or mosslike in its density and evenness, it also shows little variation in guard hair diameter between the agouti and non agouti elements of the coat - ie the background, and the pattern.

A number of years ago an investigation was carried out at a Spotted Mist Breeders Association meeting, into the reason why some cats had well defined patterns, and other had very pale salt and pepper patterns, with the solid colour intermingled with ticked hairs, leading to poor definition.

Hairs were carefully extracted from the same position on a range of cats, from adjacent agouti and non agouti areas, and stuck down on sample sheets, then examined under a hand lens. Mrs Rhondda Watson was the first one to spot it - in the cats with very poor pattern definition, the non agouti pattern hairs were very fine and wispy - much thinner than the surrounding agouti hairs --- One of the foundation tabbies sampled showed quite the reverse - his non agouti hairs were very thick and robust in comparison with the ticked background hairs, in fact with your eyes closed, you could actually feel the pattern on his coat, presumably as a result of this difference in thickness.  There was also a second source of variability: some cats had agouti hairs which were very consistently banded, so that when the coat was opened, the colour bands on each hair coincided to give an overall banded effect. Other cats had great variation in the length of the banding on each hair, so that when the coat was opened, no regular banded pattern could be detected.

I thought for many years about the underlying reasons for this variability, and eventually went back to the foundation breeds to tease out the source of the variability.

Consider first the Burmese coat: It has always been desirable that adult cats show no evidence of tabby patterning in their coats, hence the most clear coated cats have been selected to be bred from. While clear coats can be derived in a number of ways, in the early days of Burmese breeding, the easiest way of obtaining clarity, the Ta, or ticked tabby gene probably wasn’t in the Burmese population. It was therefore necessary to suppress as much as possible the spotted, mackerel and classic tabby patterns  which underlay these unticked Burmese coats. The potential non agouiti areas were still present, even if not developed - but if the hairs in these areas were very thin, even a ghost of their presence would become invisible in the mature coat. Hence selection favoured thin hairs in the non-agouti areas, which meant that once I re-displayed by introducing the agouti gene, the pattern areas, would result in afaint pattern elements which could become a problem in terms of the desired standard. Some degree of confirmation of this hypothesis was supplied by the occasional production of the reverse situation - from very clearly marked parents, I would produce a non agouti kitten - with genetically a ‘burmese’ coat - but so strongly ghost tabby, that the pattern persisted into adulthood. Likewise, because pattern and ticking were not important in a Burmese, there was potentially the complete natural range of variability in the evenness of the ticking on each individual hair available to pass over into Australian Mist, creating a further source of fuzzy ‘salt and pepper’ markings.

In considering the Abyssinian, it is immediately obvious that selection for the most even agouti banding possible had been going on for years, one of the first things a judge does is to open the coat to show each band of colour lying there so regularly, with nary a ‘hair out of place’! This was the nature of the background agouti also required in the Australian Mist.

The domestics chosen were largely selected for the clarity of their pattern, and while this contributed a plus through increasing the thickness of non agouti pattern hairs; the variability in ticking, and coat length, were in some cases a negative contribution. However, at least one of these cats, Zetes, had a very short, dense, fine coat, displaying the pattern most clearly, but also had quite regular ticking, with a very short dark tip, which made a positive contribution to all aspects of the coat.

A consequence of all this varied input, is that the coat of the Australian Mist is still a long way from settling down. At times all the desired characteristics do come together to produce the short, soft, fine moss like delicately but clearly patterned coat with a healthy shine which is the desired end point, a coat  which once experienced, can’t be mistaken for any other.

UPDATE 2016
This ABOVE article was prepared in 2008, and remains essentially correct. However, there are still many problems perceived by both breeders and judges, PARTICULARLY IN RESPECT TO 'MISTING' . In correctly described as a 'misted veil' in some standards, it IS hard to define in any definitive way, though our understanding has increased over the years. This was a tiopic which I addressed when I gave a seminar on the breed at the 2016 TICA Annual in San Diego, September 2016.

Below are some extracts from this presentation:            FIVE COMPONENTS OF MISTING 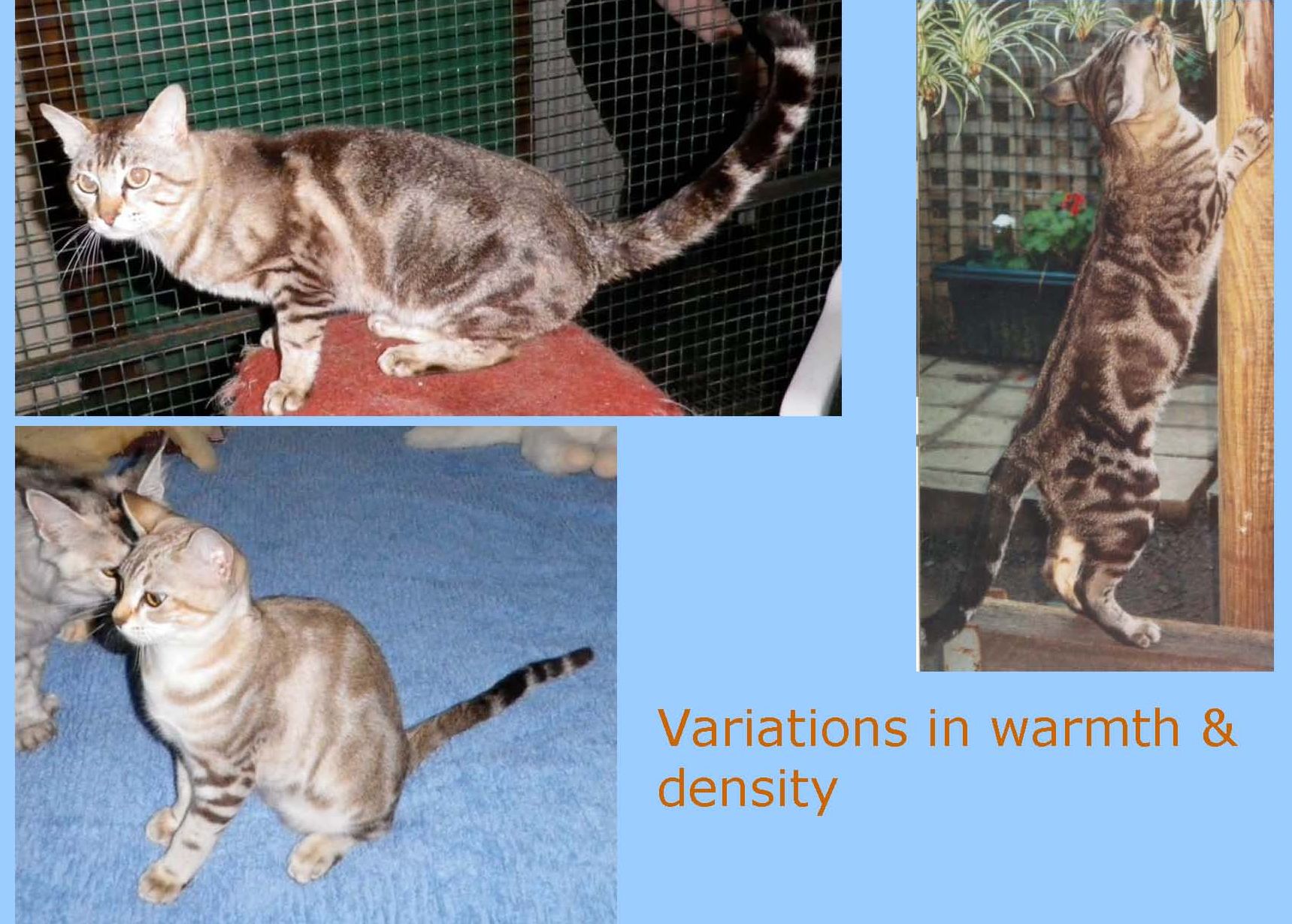