This story is to commemorate Cheryl Marjorie Straede, who died on 31st of August 2000 , and is sorely missed by John and I.

Cheryl and John came into my life in 1980, when we found ourselves relegated to the end of the Shorthair section at Shows with our Experimental exhibits. John and Cheryl were ‘home’ to a number of Casa d’Oro Experimental Sydney Silvers (later Silver Abyssinians), through Cheryl’s friendship with Ron Cole, their breeder, and of course, I was exhibiting ‘Spotted Mist  Foreign Shorthair’ early generations at the time.

John was particularly fond of Nintu Clovis, a very large chocolate spotted tabby (regrettably with white toes!! - but that is another story), and Cheryl found the whole idea of making a new breed quite fascinating .... and ‘could we please have one, John?’ In due course I produced Nintu Firiel, a lavender spotted tabby girl, from Clovis, and a lovely lilac Burmese, Nintu Harebell. Firiel went to live with John and Cheryl, and to have a litter - with every possible combination of colour and pattern - except a Spotted Mist! 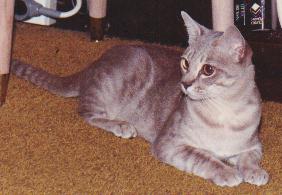 Before Firiel produced a second litter, John, Cheryl and I had joined forces, merged our properties, house sat a friend’s house while they were overseas, while a new house was added to my cottage at ‘Vale Ridge’. At this time I was commuting daily - and soon came to split the kittens and Mum’s with us in Epping, and the adults at Vale Ridge. After several attempts, and hormone treatment, John, Cheryl and I were all at Vale Ridge, in our new house when Firiel finally produced her second litter, to Nintu Horrison. Nintu Haidee was sold from this litter (to Bette Diver, who helped with the programme for a few years). Then another long kitten drought.... The next 2 litters were unsuccessful - Firiel was just not a good breeder. Finally she arranged for herself (on our front verandah!) a mating with Kitty Sargent, the blue tabby boy from the other side of the valley. We kept Nintu Jolly, a very vigorous blue spotted tabby male, and it is from him that most of Firiel’s descendants come - at the fourth generation 31 breeding cats, and in total at present 119 breeding descendants have been registered from her. It is interesting that all except 1 marbled/classic patterned cat has her in their ancestry, and of these marbled cats, about 70% also have the other early classic cat ( Nintu Rhiannon). Firiel was spayed, and in August 1986 was carried off in triumph to a pet home.

Cheryl always enjoyed the subsequent litters of Australian Mist, and kept an eye on Firiel’s descendants. One particularly famous litter sired by Nintu Jolly included Nintu Featherbed, whose siblings were also named by Cheryl after Motorcycles ---- Featherbed became Bronson, and belonged to Whiskas - though I did breed 2 litters from him, before he retired.  Nintu Dormer was his son, and I still keep the blue spotted male line going with his great great grandson, Nintu Genial Quentin.

Cheryl continued to breed Sydney Silvers/Silver Abyssinians for a number of years, until we realised that the population of cats was altogether too large. The Silver Aby breeding stock was placed all over Australia, and their descendants are on the bench today. Cheryl also made good use of all our kittens when she was studying Developmental Psychology at the University of New England. Part of the course included a research project - from which was born her dissertation, ‘Infantile Handling and Development in Spotted Mist Kittens’ a copy of which forms part of our Breed Archives. After work each night Cheryl would spend a set time patting and handling a set of litters - with a matched unhandled set, and she and I would record the first occurrence of various behaviours - certainly the handled kittens were more interested in coming out, more wriggly and more adventurous - and indeed, Cheryl did get excellent statistical results in this experiment - as well I think as considerable pleasure from carrying it out.

As anyone who knew her will be aware, Cheryl had an abiding  passion for Red Point Siamese cats - Chrismus Bonus (‘Chrissy Beau’) is buried in our garden in a place of honour. He was followed some years later by Hugo - a foundling from the streets of Balmain. He had a nasty skin cancer, which we had treated (with irradiated gold beads, no less!). Hugo’s life is coming to an end, as the cancer has returned after 3 years of remission. Cheryl was already grieving the inevitable, never dreaming that she would depart before him.

As I could see Hugo’s days were numbered, I had bought a pair of Red Point Balinese variants, to breed for her the Red Point Balinese boy to be called ‘Calypso’ that she had dreamed about .... John wants us to continue with this plan, as he would like to have Calypso, when he arrives, in memory of Cheryl.

Cheryl’s part in developing our breed may seem small from the above account, but her hidden contribution continued for the 18 years we were together - she worked full time, and was a major support to the feeding and care of the breeding cats - and all the retirees. When we found that there was Feline Leukaemia all through the breed, in 1987, she was there recording and supporting us through the long anguished day of testing and euthanasia. I thought that was the saddest day of my life, and it took me years not to weep on each anniversary. This sudden, unexpected, and totally devastating loss of Cheryl herself will take immeasurably longer to come to terms with, and has changed the course of our lives forever.

I hope that all you who read this tale will look with new eyes on each today, and enjoy it, and your feline friends. Here is the poem which I wrote for her, and read at her truly beautiful Funeral Service;

Love is not a cake, once baked, can only be divided,
Those who come first ever jealous of their share elbow out the later comers
And cry ‘Beware! there is nothing for you here.’

Love is like a spring renewing with the seasons, ever flowing,
Bursting forth with new vigour when least expected
Crying ‘Come, for you, too, there is fulfilment here’

The hidden waters of love lie beneath all our earthly selves,
In hope they leap forth to embrace another, to flow joyfully intermingled.
Watered by love, a landscape of beauty grows for all to share.

Forests of comely trees, verdant gardens of delight, love creates,
Along its course sweet birds sing, lovers hold hands for eternity.
And even when the lovers have passed, the heart remembers, and the land betrays
That sweet rich waters once ran here, whose traces can never be erased.

Oh Cheryl, Cheryl, may you ever wander there, upright , unaided
Supported only by the warmth of those who love and remember you.
I see your shadow pass away beneath the flowering trees
A dainty lady accompanied by a tall Red Point Siamese Cat.

BACK
Return to On the Spot