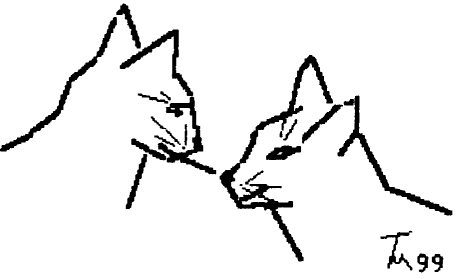 Australian Mist Cat Fanciers Association Inc
is the direct  descendant of the Australian Mist Breeders Association, an informal grouping of breeders, owners and friends of the Australian Mist (formerly Spotted Mist), first gathered together by the breed founder, Dr Truda Straede in 1986.
Initially there were quite a few meetings, as the standard was being formalised, extra colours added (brown, blue, chocolate & lilac initially, plus 'other colours' category) and new breeders being introduced to the breeding stock. This 'unofficial' association was open to all - we had a working fund, and a Distress fund, (established by Mrs Sue Martin, whose involvement with  Spotted Mist predated its becoming a  Championship breed), we all liked tasty  lunches and a modicum of bubbly ....  We had fun, and shared much and learnt from one another 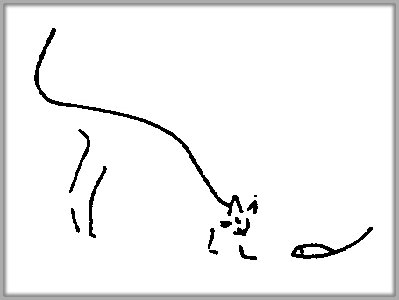 In 1988, an enthusiastic new breeder, Mrs Anne Burrows, suggested that there be a Newsletter - 'On the Spot', an idea greeted with much applause.  Truda designed a logo, which Anne 'tidied up' professionally.  Anne became the first Editor. 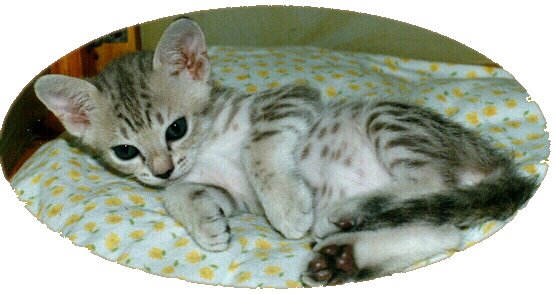 Our numbers grew, we spread across Australia, we supported each new breeder as they battled for recognition in their own state, or with their own governing body. We picked up the pieces after  disasters, we appeared on Television programs.  Australians started to learn about our fabulous All Australian Breed of environmentally friendly people centered cats.  A new pattern was added - to the 'Spotted' pattern  Mist was added the 'Marbled' pattern - we became the
Australian Mist. 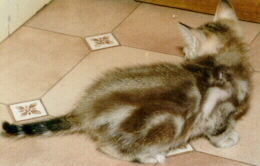 Assured now of a place at many an Aussie hearth, our numbers continued to grow. 'On the Spot' had a circulation of just under 100, breeders reached almost 20 in number.

At this stage, one group of breeders decided that they would like to break away and create the Australian Mist Breeders and Fanciers Inc., affiliated with WSCA and the ACF with a new Newsletter of their own. This  sign of the maturity of the breed prompted the founder to hope that the breed might now outlive her!

This association is unaffiliated with any state or national cat governing bodies, the intent  being  to further the understanding and appreciation of our very own home grown breed, and to share our knowledge about and pleasure in our cats with the rest of the membership - and if possible, the whole world!

The Newsletter, 'On the Spot' continues, subscribers are invited to become Members or Associates .  All Members and Associate Members are encouraged to have their say. The logo is retained, and a new distress fund is established. Lots of eating and drinking together is sure to continue to be enjoyed by all:
Why not join us ?
We now   have Breeder Members in the UK and  the US.  While our active Membership has remained steady at about 25-35 for the last few years, and there are now about 10 active breeders, this obscures  a degree of turn over, as people join us for a while, breed a litter or two, then return to the world of pet owning, rather than breeding. The word continues to spread about the excellence of Australian Mists as indoor pets - and this is our highest achievement.