My present feline population consists firstly of 14 gentlemen. 4 are Maine Coons, the rest a wide age range and genetic diversity of Australian Mist including several lads from my new blood line. They  live in groups of 2, 3 and 4, with separate suites  for entertaining the ladies.

Of the 20 ladies,  8 are Maine Coons and  6 are kittens.  Several ladies are earmarked for retirement and rehoming after their spring litters.
Girls go very rapidly - I often have a waiting list, but it is always worth inquiring whether anyone is ready to go. Then we do also place 'Australian Mists in distress'. these may be living temporarily with any one of us, but we generally all know which cat is waiting where!

I always have a few cats in the house as pets, they seem to choose themselves, though I do like to find homes for as many as possible when their breeding days are over. I  think it’s fair to reward them for their contribution to my pleasure in their progeny , by endowing  them with a loving home where they can live out their days as 'top cat'. In my  house in Victoria, I have very wide verandahs divided into large houses for the ladies. Some houses have access to an enclosed garden area, and here youngsters, (and very oldsters!) have time outdoors. At present I have Yum Yum only in the house, and a small selection of new kittens intended to join the breeding population. 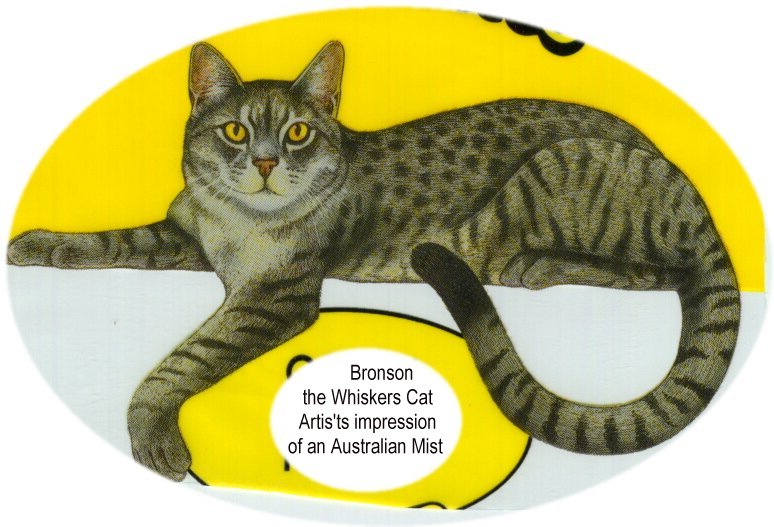 Of the remaining 3 residents, mainly the superannuated Aussie Mist gentlemen, a moggy or two - the accumulation of a life of breeding, sleep in their own portion of the verandah at night. During the day they roll (literally - excess of good eating is very prevalent in retired Aussie Mists) around the garden, ready to sit all over anyone who pauses too long in their presence. My oldest cat is an Aussie Mist stud, Hungerford, and my second oldest Isander a maine Coon stud.

All these oldies make visitors very welcome. Being the most wonderful ambassadors for the breed, they sell many a kitten for me.
And the commission?
Yet another tasty tidbit to add to their girth!

The ability to maintain over long periods, groups of mature males has been both a product of my initial selection criteria, and one of the reasons why this very new breed, with  no more than a couple of dozen breeders has a good  broad  genetic base. As well as my 10 odd studs, there are  at least a  further 10  elsewhere in Australia, and at least 10 in the UK and 10 in the US. This total  is not far exceeded by the number of breeding females. Some of the  boys are repositories of earlier lines, so that if we need to go back behind a problem, or want more of something desirable, the ‘living ancestor’ is available. I also collect boys from other breeders, as a way of harvesting the contribution that they have made to the development of the breed. As in all breeds, many people join us for a few years, a few litters, then retire, and many do not want to keep their own stud cats, or at least want to swap with me from time to time. I try to encourage the maintenance of an open gene pool within the breed, so that no-one diverges too far from the breed standard, and no undesirable traits become too widespread.

My over forty years of breeding has confronted me with many challenges, particularly concerning the health problems involved in keeping a very large number of cats.   I have had excellent support from family, and my vet, Dr Karen Hedberg. Without Karen’s help and advice, and interest in the developing breed and genuine distress when very difficult decisions have had to be made, I doubt that I would have stayed the distance. I am really delighted to say that after a false start or two, I have discovered an equally committed cat vet in Dr Ros Fleay, here in Victoria - though the drive to her is even further than it used to be to Karen! Of late I have moved closer to home, to my local vet who is most satisfactory, and who well suits my stage in life!!

Starting in 1976, it took 10 years to reach championship status, and another 10 years before I felt reasonably confident that the breed was here to stay.
When we added a new pattern (marbled) to the Spotted Mist, as they were originally known, the change of name to Australian Mist was really the final seal of approval and stimulated a great surge of activity amongst pet  kitten buyers, avid to have a wholly 'Australian Made' pet. One confirmation that the breed was 'here to stay', is that the number of breeders is now sufficiently large to have spawned a breakaway organisation (Australian Mist Breeders and Fanciers Inc), in turn stimulating the original informal association to incorporate as the Australian Mist Cat Fanciers Association Inc. The 25th Anniversary of the breed was celebrated, with guests including the initial importer into the UK,  ( The Late) Mary Stuart. A few pictures of this occasion may be seen in my Brag Book.

Personal spinoffs from this long road have included long lasting friendships with other Aussie Mist breeders. A growing knowledge of the practicalities of cat rearing resulted in  the production of a Breeders Manual . Another spinoff has been my involvement in the NSW Cat Fanciers Association, as firstly Journal Editor, later as part of the Management Committee.  Invitations to become involved in developing Codes of Practice  for the Welfare of Cats, and the development of Companion Animal Legislation at the state level have come my way.  I was a founding  member of the NSW Companion Animals Board, as the nominee of the NSW Cat Fanciers Association. Since moving to Victoria ,I  became a Member of the FCCV Management Committee, and represented all three Cat Bodies in Victoria on the Domestic Animal Management Implementation Committee ( now disbanded). Through the contacts I have made in this role, I am hoping to further the interests of all breeders - and all cats. Recently I have joined  Australian National Cats  Inc where I now form part of their breeds sub committee and organise breeder education workshops particulalrly dealing with the most recent upgrades to State Regulations..

Last but not least, I have known a great many cats as friends and dependents, some fabulous show cats, some top purrsonality cats, and some that just show they love you with every move they make.  I can’t bear to even think of a life without cats, I  can’t cope with neglect and unkindness towards them. Through creating a loving house pet, and through  becoming involved with creating a framework for an improvement in the lot in life of all cats, I hope that I have repaid the pleasure that they have given me. If you have a cat as companion,  or feed the cat that comes to your door, I wish you the equal of joy and pleasure. If you don’t have one, I urge you to think about acquiring one - perhaps it might be an Australian Mist.

The Breed logo:
The original of the breed logo is a silver pendant made for me as a fiftieth birthday gift. From this a mould was made, and bronze/silver medallions are cast. Suitably engraved,  these are occasionally  presented.  Special occasions are  marked by presentations. Winners have converted medallions into earings, brooches and tie bars.
All designs based on the medallion are copyright to Truda Straede.