Recently I have been going through my breeding stock carefully, looking at pedigrees, and cats, deciding which cats could be desexed and petted out, or might go as vasectomised studs. I was assessing which lines have features worth conserving, and which it might be better not to breed from any longer.
Of course, I found that there are many cats from the lines introducing the marbled pattern which in themselves could do with improvement, particularly in head type (too long), but a bonus with the Ussi/Roundel marbled line is a superb short, dense coat texture rather like silk velvet to the touch, and a truly grass green eye colour.
When I considered the other main source of marbled, I made a very interesting discovery - Nintu Abagail Silk (Silkia), it turns out, is a very important lady. Not only is she the mother of the 1999 Exhibit of the Year (Nintu Marmor Bezique), but she has a huge number of breeding descendants, including both studs and queens. In addition to carrying the marbled pattern, she has a truly lovely head - rounded on top, nice nose break and well set eyes and ears. She also has green eyes. Her weaknesses are lack of much breadth in the muzzle, smallish ears, lack of warmth in the coat and very delicate markings on her single coat. 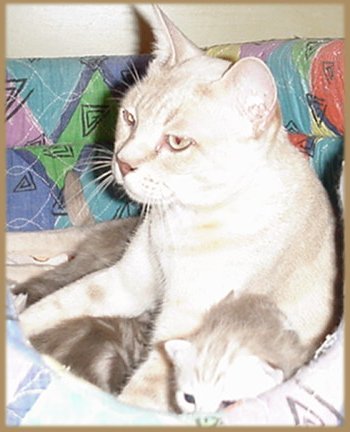 Silkia is, of course, only Generation 3, introducing a new Burmese (Thera Bounty) and a new domestic (Sprite) on her maternal (Nintu Bay Betony) line, and on her sire’s (Nintu Eve’s Temptation) side she brings the vigour of the Kitty S, Featherbed and Dormer line.
Initially I thought I was never going to breed with her - although born on 10/7/92, she didn’t have a litter (of 1, Dainty Helen), until/4/95. She appeared never to call, though she lived with a boy, and seemed to be mated - probably a silent caller, eventually, after trying the usual treatments, when she was over 2, Karen (Hedberg) had a look inside - she had endometriosis and cysts on her ovaries. After the cysts were broken, she was treated with antiprolactin - an experimental amount of which Karen was able to procure for me. It was a last ditch effort, but it worked, and after that first litter of one, we rapidly moved on to litter number 2 ---- and now she has litter number 9, and is still producing vigorous, quality kittens.
Analysing her litters is a very interesting exercise:
Litter 1  1/4/95  x Awatea Kohu Mushroom
Nintu Dainty Helen, lovely rich pinkish peach spotted with stunning green eyes and very prominent whisker pads.   The mother of Fruitful Harvest from which Trabmakov Anneaboof, (Kelly Fletcher) is descended; and of Nintu Guardian Daemon, a very vigorous gold stud.
Litter 2  4/11/95   x Nintu Boy Adam
Four kittens including a lilac classic (marbled)
Litter 3  19/1/96  x Nintu Bold Korrigan
Five kittens, including Evening Ode, and Easter Olive. This litter appeared at the Spotted Mist 10th Anniversary show.
Litter 4  13/8/97   x Nintu Excellent Fellow
This mating was done immediately the marbled pattern was approved - both parents were known to carry the gene --- the result was overwhelming - 5 kittens, of which 4 were marbled- Nintu Marmor Bezique  Valerie Hamilton’s top show winner and sire, Nintu Marmor Bee-Balm, who had a couple of very important litters for me, then flew to Jeanette in WA to give her a stake in the marbled mist, and Nintu Marmor Bacchus, purchased by Barbara Dorrell who showed him as a neuter - with much success, and much publicity for our new pattern.
Litter 5   28/11/97  x Nintu Bronze Oak
I was hoping Oak might have carried marbled (he had a marbled sister), but all 8 were spotted. I kept Xenon as a stud, his first offspring have just reached the show bench, I am still hoping that he might carry marbled.
Litter 6   4/5/98  x Nintu Divine Wilfred
A scrumptious litter of 5, including 2 marbled, Daria and Dandy, with superb green eyes, and I also kept Jemima, a chocolate spotty. These kittens not only had green eyes, but a much better coat texture than Mum. 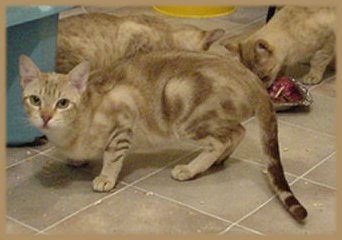 Nintu Marmor Dandy with Jemima in the background,  just on maturity, January 2000
Litter 7   5/1/99  x Nintu Dracon Xia
Four elegant, really well spotted lilacs. Green eyed Xenopus is about to start a show career, and his first litters are on the way.  This is a new line descending from Allspice. 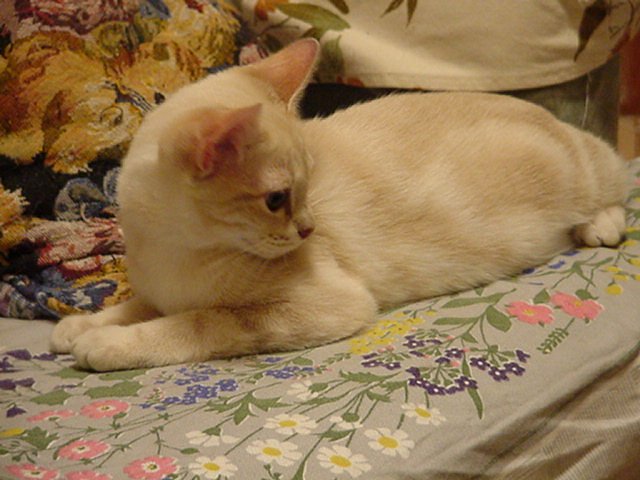 
Alyxia  herself has a Silkia great grand daughter, a delicate coloured, very pretty lilac marbled, Nintu Marmor Orana, who is staying as a show and breeding girl. Orana has had one of the new line foundation litters ( x Pan) and on lease, the only  litter for the Burrgan cattery.
BEE BALM . While with me, Bee Balm had 2 litters, from the first of which 3 marbled girls, Eirene, Essyllt and Eunomia were kept.  Eirene and Eunomia both have future studs in their first litters. 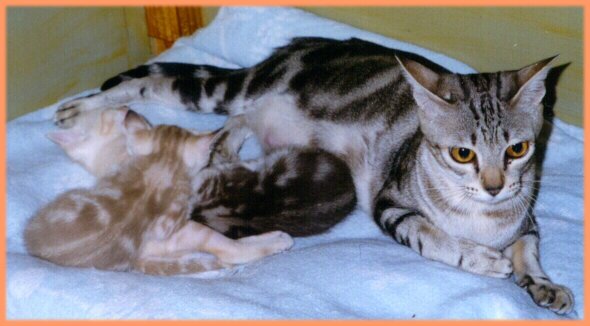 Nintu Marmor Essyllt with half of her litter to Nintu Marmor Dandy - note the lovely marbled pattern and good muzzle but very wrong gold eyes which some of these grand daughters have!
From Bee Balm’s second litter ( X DAEMON, doubling up the Silkia characteristics), Harmon Fame, a delicious peach spotted boy was kept, and Holly Flower went to Victoria to join Pat Leane's  new cattery. Jeanette’s first litter (from Nintu Family Idol) also had a male worthy of being a stud (SATU TALIESIN), and he is staying  with her. The BEAUTIFUL BEZIQUE (also to be seen on the brown colours page) has sired a couple of litters from Nintu Marmor Aline, including the very well used Vavra Marmor Kai, who himself has breeding children. Bezique, Kai and Seurat, his neuter brother, took the top three places in the 1999 Exhibit of the year Awards. Bezique has not only the lovely rounded Silkia head, but also a marbled pattern so far unsurpassed by any other cat or kitten.

DANDY has sired four litters to date, a litter to Polly , mixed in both pattern and colouring, and a litter to Essyllt, which were, of course, all marbled.  The Polly litter was good quality, but fairly variable, as it was a big outcross, whereas the Essyllt litter is more uniform, and reinforces the Silkia influence, as she is on both sides of the pedigree.
DARIA had one super natured litter of 3 marbled, to Faramir.
JEMIMA’s first litter of 5 to Epicure were truly superb - and include my first export to the City of the Computer Mouse (Seattle, USA), a scrumptious gold spotted neuter chosen and exported by a former customer’s daughter when home for Christmas. Jemima hada second  litter (to Xenopus, reinforcing Silkia influence)  in early March, 2000.Her third and fourth litter were both to Kouros, finally I managed to choose the right kitten to keep - a show stopping brown marbled, Ana Cardi. We look forward to her further endeavours. Cardi is now herself a spay, after some sterling litters. Amongst her progeny Cassiopea, mother to Doucette, start of the Moonchaser Mists, Just Pete a splendid brown spotted boy now in NSW, and several Kittykatz  opffspring in Queensland. From her final litter, a gold marbled girl, Kin Fair is now growing up.
YGGDRASIL's first litter to Nintu Impromptu Rumba included Nintu Jaunty Hero, an extremely handsome chocolate spotted stud with lovely eye colour. His third litter was the first full register Thera litter, containing Thera Marmor Astarte, a superb blue marbled girl and her brown spotted sister Apollonia . Ygg also went travelling to Queensland during 2006 ... He now lives the sybaritic life of a vasectomised stud, with the necessary always on hand. Nintu Jaunty  Hero has turned out to be one of those studs who will remain entire their whole life - not only was he the sire of one of the two first queens (Thera Linaria to Cassiopaea another Silkia descendant)  to be exported to the UK,  every litter he has sired produces beautiful quality kittens, he is a real 'improver' and unifier ... another trait passed down from the wondrous Silkia herself. 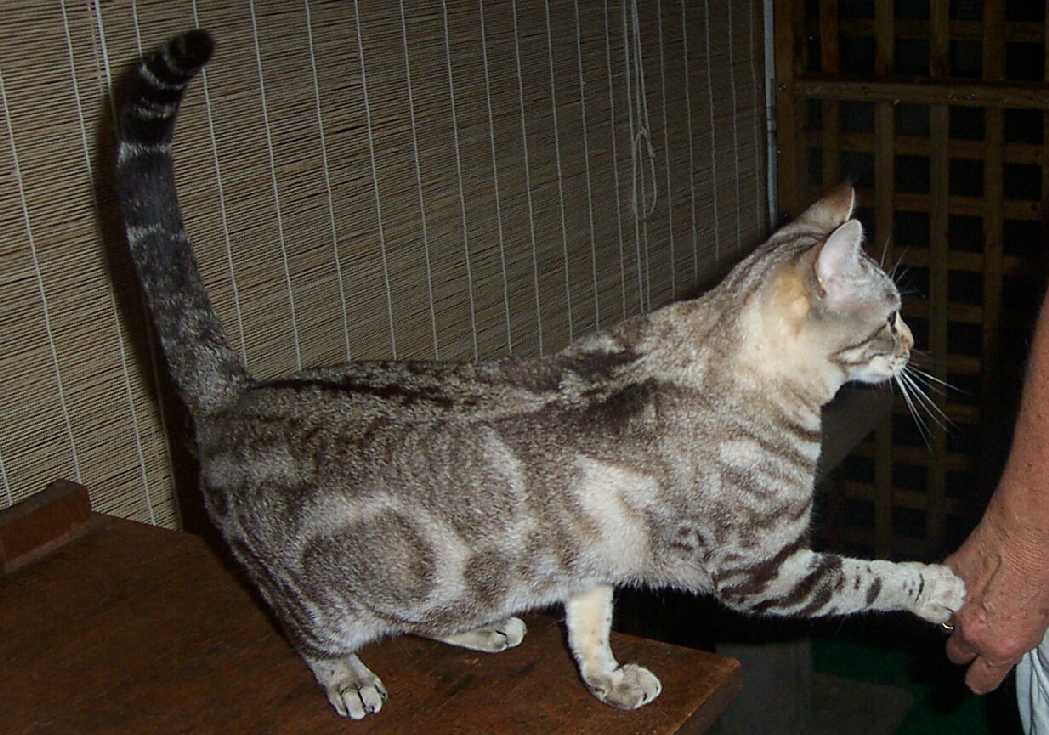 Silkia shows no signs of wanting to give up breeding, so I expect that there will be more opportunities to try her with studs new and old. At the same time, her breeding descendants both spotted and marbled have opened up a whole new range of vigorous, good type cats, each, it is true, with features which need improvement - but then, that is what breeding is all about!

Silkia did give up breeding, finally, after a litter of just 2 male kittens to  Nintu Family Idol, in November 2003. One,   Nintu  Justinus Nestor, was kept as a stud.  Silkia was spayed in the middle of the next  year, and joined the life of leisure keeping the oldies in order.  In early 2008 she became very slow in her movements, and was obviously suffering from a heart condition, so  on the  29th April she made her final journey. She now rests  in the garden, which she so much enjoyed.  A truly wonderful queen.