It seems a long time ago, that day that I rushed into a cat show ( it was the Federal, I recall, I think in 1975), found a litter of Blue Burmese ( they were the flavour of the month, that year), and said 'I will have one of those, a girl, I want to breed and show.'  A bit amazing really, as I had only owned moggies previously, my acquaintance with pedigree cats restricted solely to the seal point Siamese that I had bought as a present for my mother. Ah, that I had known where it would lead me!

That first blue girl I did not have long, she died of ?? It took me years to remember her with anything but pain. I ordered a replacement from the next litter, and bought myself a brown girl as well - and then a Tawny (called Usual in those days, and they were!) Abyssinian.

The first time I showed, at the Blue Mountains Show, I won Best Kitten in Show - with the brown girl. A bit wasted on me, as I really had no idea how rare a win that was. Kebbel Patiki (Nammi), my blue girl, never did particularly well at shows, but bore me lots of lovely kittens - she is not, however, in the family tree of the Aussie Mists. Nor is my brown girl, she had breeding problems, problems that I now know were derived from Feline Leukaemia, at that time only heard of. Yes, I started breeding before there were tests, let alone a vaccine. There wasn't any vaccination except for Feline Infectious Enteritis (Feline Panleucopaenia) available for cats. Flu vaccination became available a few years after I started breeding, and what a revelation that was!

My first Abyssinian is in the breed ancestry - she was the mother of Nintu Nepenthys, a cinnamon abyssinian, and the first source of the cinnamon (light brown, bl) gene, from which gold and peach are derived. My first stud, Kempala Leo, a nut brown lad of melting temperament, and my lilac boy, Kingsmead Lilac Beren (the first true lilac Burmese to be brought into NSW) the bearer of the prominent whisker pads which form part of our breed standard were both very important --- but I run ahead of myself.

Beren (aged 14 yrs) Note the whisker pads
Initially I was unable to get my Abyssinian into kitten, she went off call the minute she was put in a car to go to stud. So eventually I walked her around the corner to a friend's Burmese stud - it worked, lovely kittens. The next time I managed to take her to a stud of the right sort - hence the advent of Nepenthys. Meanwhile, the hybrid daughter, living with her new owner had made her own arrangements, and produced a superb litter of various tabbies - wildly striped and necklaced ticked tabbies and superbly spotted tabbies. Ideas began to flit through my head. I arranged for the hybrid girl to mate Leo to further my ideas - but she was run over before the kittens were born. 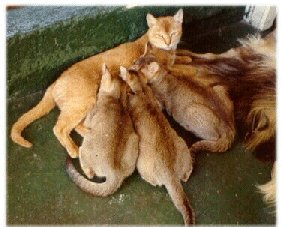 Undeterred, I created my own Burmese x Abyssinian - and about this time made application to the Royal Agricultural  Society Cat Control for an Experimental License - I was told to go away and produce some kittens to support my hypothesis, and that then they might consider my application.... I am quite convinced that they never expected to hear another word from me, not surely that
a) my genetic ideas had been correct
b) that I would actually reach the stage of making a formal application.

In the  days when I was the Experimental Breeds Co-ordinator for the New South Wales Cat Fanciers Association (the direct heir of the RASCC), I marvelled that so little thought was given to even countenancing allowing me to embark on an experimental program. I wasn't very experienced as a breeder, had no idea of the time, the cost, the work, the heartbreak that lay ahead. Indeed, it really wasn't ever in my plans to devote the better part of my life to a new breed of cat. These days I use my hard won experience to help hopeful new breed developers to come to grips with the size of the challenge ahead, but at the same time, I do offer as much assistance as possible, particularly on making best use of the stock they do produce to arrive most economically and expeditiously at their goal. There are lots of fabulous ideas out there - indeed, I could design you half a dozen new breeds, complete with foundation stock, coat colour genetics, breed standard and selection criteria just like that ---- Just as well I am not in my 20's again - I would be tempted, though this time I would be sure to be better resourced, both with equipment and cash! 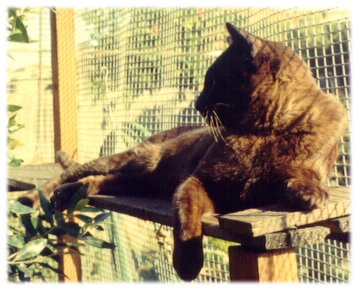 To return to the tale, it took me a couple of years to collect together those kittens to fulfill the 'show us' requirement, including Nintu Horatio ( he held the bridge, you may recall) the very first brown spotted Australian Mist (from a half Burmese tabby, Elf, to Leo), and two scrumptious kittens from Leo x Nepy back cross Burmese (Beren), each one gene wrong : Clovis Brown Spotted Tabby ( missing the homozygous Burmese dilute cbcb) and Naia Chocolate Ticked Mist (with the Ta allele rather than spotted/mackerel alleles). 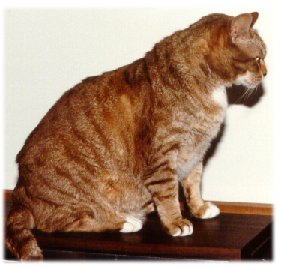 Clovis (14yrs) displaying all that white

There was a real problem though - Clovis had white toes, white locket, white in the groin, white armpits and white on the chest in the mid line---- I believe I almost missed out on permission to continue because of all this white  -- until it was realized that it came from all 'pure bred' Abyssinian and Burmese stock. For what it's worth, the locket certainly came from the Aby - Nepys' mother had one, and the white toes from Beren - a Burmese breeder later  had a kitten from him with white toes and tail tip. The white on the mid line, armpits and groin appeared from time to time in kittens from Leo, and were not uncommon in Burmese in general (and I still see them  at times).


So I started, two with lovely type, Clovis and Naia, one with a lovely spotted coat, and excruciating type, Horatio ( he would have been a good candidate to initiate a tabby Oriental program). I soon added a lovely blue spotted tabby boy, Zetes to my foundation stock, and I was off and running.

Oh, and what were we called: Spotted Mist Foreign Shorthairs - as a temporary name. It took us years to be allowed to call the breed Australian Mist - it was known as Spotted Mist for it's first ten years, as I believe it was considered a bit pretentious on my part to want to call them 'Australian'. The introduction of the second pattern, Marbled, created a pressing need to change the name, finally achieved in 1998.

This jotting was created specially for this website. If you have enjoyed it, email me (ausmist@dcsi.net.au ) and let me know whether you would like to hear more.

Please note that  photos are scanned from  old archival prints.

If you enjoyed this page please try Riki - more jottings, about a much loved stud cat, and a record of my Riki Memorial Awards.

Please also try Silkia, a very important lady, originally published in On the Spot No 49, but here shown with colour picccies, and some more of her progeny, updated to 2002. She is very important in the new bloodline currently under development.  You never know, there might be a kitten there for you too! and where you can find information on coat colour genetics and the tabby pattern.

Issue 51 also contained a bit more of our history, in Cheryl, Firiel, & Australian Mist. Now posted with picture on the Association Site.
There is also a three part illustrated Historical Timeline

BACK
to Nintu Cattery Index Page